Read More
more in: Things To Do
more in: Events
more in: Blog
more in: Food & Drink
more in: Hotels
more in: Trip Planning
share
< Back To Previous

The American Empress to Call Vancouver USA Home and Headquarters

The American Empress to Call Vancouver USA Home and Headquarters

VANCOUVER, Wash., - The American Queen Steamboat Company announces its second vessel, the 223-guest American Empress, which will make Vancouver, Wash. her home port. The largest riverboat west of the Mississippi, she will officially join the fleet's Memphis-based American Queen on April 5, 2014. In addition, the company is pleased to announce that its Pacific Northwest office will also be based in the southwest Washington city of Vancouver U.S.A., just across the Columbia River from Portland, Ore.

"We are delighted to welcome the American Empress to Vancouver U.S.A. and our unique Northwest paradise on the banks of the mighty Columbia River," shares Vancouver U.S.A.'s Rosemary Arruda Cooke, Director of Sales and Destination Services. "The style and service for which the American Queen Steamboat Company is known comes as a welcome addition to the region and we are thrilled for her to call our community home."

Claudette Waggoner, wife of Chairman and CEO John Waggoner, will serve as godmother and officially name the boat as part of festivities in downtown Portland on April 5. Former Secretary of Transportation Ray LaHood, longtime leader for the U.S. maritime industry and champion of U.S. river cruising expansion, has been announced as the ceremony's keynote speaker. Highlights of the festivities will include performances by local musicians, a blessing of the boat by Chinook Tribal elders with a bottle of local sparkling wine crashing against the American Empress bow. Additional participating dignitaries include the 13th Coast Guard District Commander Rear Admiral Richard T. Gromlich and Acting Maritime Administrator Paul "Chip" Jaenichen.

The American Queen Steamboat Company entered into a purchase agreement of the 223-guest riverboat with the U.S. Maritime Administration (MARAD) in May 2013 and has had a team onboard preparing for her April 2014 launch on the Columbia and Snake Rivers. Formerly the Empress of the North, the American Empress will deliver opulence on a grand scale, following in the pedigree of the line's namesake riverboat American Queen, and proudly serving as the largest overnight riverboat west of the Mississippi River. She is currently undergoing final preparations for her inaugural season and sea trials with the U.S. Coast Guard are scheduled for later this month.

Her maiden voyage will be a nine-day journey immersing guests in the splendor of the Columbia and Snake Rivers, departing from Vancouver U.S.A. Featured stops include some of the region's most celebrated ports including Astoria, Ore.; Stevenson, Wash.; The Dalles, Ore.; Sacajawea State Park, Wash. and finally Clarkston, Wash. Complimentary shore excursions will be available in every port and include the cultural and historical landmarks that signify the living legacy of the region's first settlers. Travelers with specific interests are encouraged to enjoy the variety of Premium Experience Excursions such as the Walla Walla Wine Trail or a journey to the volcanic crater of Mount St. Helens. Daily lectures will also be provided by the Riverlorian, an onboard history and culture expert. 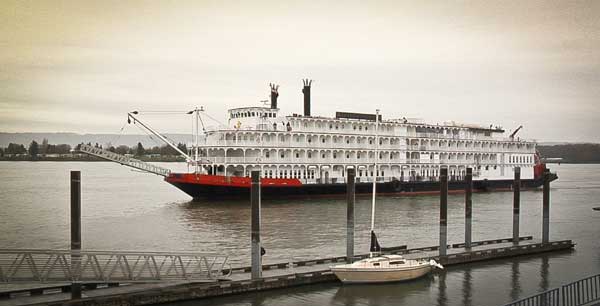